Don’t worry, it is actually August. Still, because they won’t be dictated to by anyone, especially dead Romans, the Nasty Nessies are having their Monthly Diary for July right now. This month it’s Desperate Measures telling us all about herself. 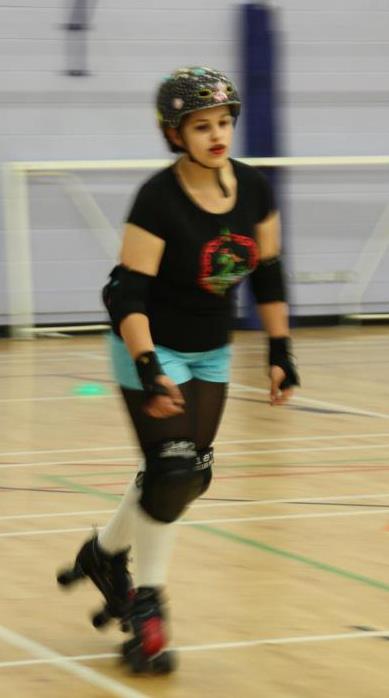 What first attracted you to Roller Derby?

The thing that attracted me to derby was my sister: she was part of NNRG but now she is in Glasgow. When she started, she kept going on about it but I was only 17 at the time, so I could not join at that point. After, when I turned 18, my sister dragged me along and I just fell in love with the sport; everyone was so nice that just kept me going until now I can’t even miss a session without hating the fact I can’t go!

Derby names are an important aspect of the sport, especially when you’re starting out. How did you choose your name, and how does it reflect your personality on track?

It was so hard of me to pick my name, it took me weeks! When I was driving one of my favourite songs, Desperate Measures by Marianas Trench, came on and I just started picturing a bout and thought it was perfect. I think it reflects me on the track because if it was going to come down to taking  desperate measures to win I would do what is needed.
What was your biggest initial difficulty?
My biggest difficulty was doing jumps: they scare me so much. I can do them but I just had a mental block for so long when I came to the jumps because I kept hurting myself when doing them. But thanks to Mrs Cherry Bow our bench manager I can do them now.
Lots of roller girls find it hard not to spread the word about their new sport. How have you been spreading the word?
I tell everyone I meet about derby: most of the time no-one cares or they laugh because they think all you do is go around and hit people, but then you get some people that are very interested and end up coming along to see if they will enjoy it.
What’s the most important thing you’ve learnt/ done this month?
The most important thing I have done this month is redoing my 25 in 5 and getting the 25 in 4 minutes 18 seconds.
What were the most difficult and the best things?
The most difficult thing was the jumping and the best thing is the derby community: everyone is so nice and the NNRG’s are so amazing.
What’s new for the Nessies this month?
The Nasty Nessies have just started doing training outside in the sun so hopefully I won’t fall tonight!