The third team we’ve covering in the run up to Auld Reekie Roller Girls’ ARRGmageddon Tournament is Lothian Derby Dolls. LDD are, perhaps, the underdogs coming into the tournament in some ways, having lost to Dundee’s Bonnie Colliders early this year. However, their roster at that point was somewhat different to their current lineup, so it’s really hard to call.
We talked to their Captain, Fully Harmed, to see how Lothian’s year has been, and how they’re thinking about the upcoming Tournament: 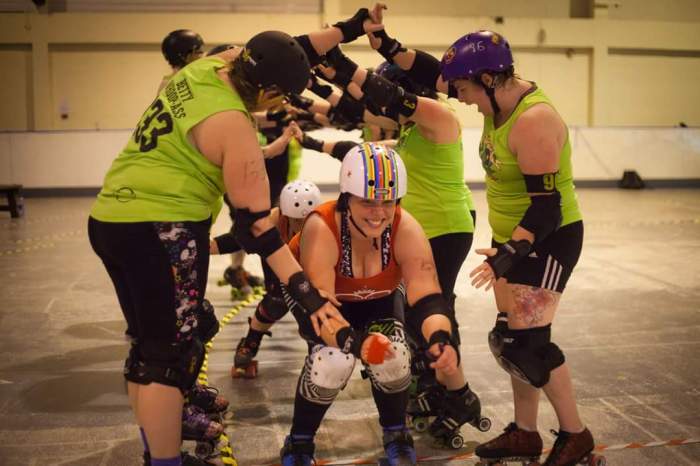 – So, I think it’s fair to say that Lothian Derby Dolls have had a mixed year so far; early on you had a few losses against the Bonnie Colliders and Mean City, but more recently you pulled off a win against Ayrshire Roller Derby away… how would you say the league is steering itself?

I would say this year has been very mixed. We started off quite low; I think with LDD it’s always very skater dependant, and we lost a few reliable, strong skaters. We’ve really spent the summer building up our core again. We’ve got a reliable lot of, I’d say, 15 skaters, but, because of the type of league we are…  you know, it could be chicken pox and, because we’re mums, that could be (say) 5 skaters off for a couple of weeks.

We’ve also had some injuries with some of our players, Poca Loca [LDD ViceCaptain] came back quite strong from an ankle injury, but she’s still not 100%, and Fury has a niggling knee injury.

However, I would say it’s been a really really positive year, because while we’ve really stepped back from bouting, we’ve really worked on our skill, to get that more solid; our skills, our communication, our teamwork. Definitely, on taking over as Captain, that’s been our focus as a team: it’s not about winning or losing in my eyes, (I mean, a win’s brilliant) it’s about us all having our personal goals, and as a team having a goal.

We are a little league; we’re the smallest of the leagues who will be playing [in ARRGmageddon], by miles. I mean, we’ve got 30 active skaters just now.  For us to be even putting ourselves forward for the tournament, we’ve come a long way, this year.

Ayrshire was a brilliant experience; lovely people, lovely skaters. We were really happy to win, but for us it was more about showing that working on our skills together as a team, and you know, it really proved to us that when you work on your skills and trust each other, it works.

So, thats the change from the [bout against the] Bonnie Colliders… when we played them, we weren’t really working well as a team, I would say we got downheartened very quickly.

– Despite you saying that, LDD are the only team competing at ARRGmageddon who’ve actually had Tournament experience (from the Battle of Britain tournament in 2013). Quite a few of the skaters from 2013’s roster are still around, has their experience helped in preparation?

I think it does help. The skaters who were involved in that experience, you know, they’ve been very honest – that there’s negative [factors] to being involved in a tournament – but, we’ve talked about that, and we’re going to try to avoid those issues with people’s stamina, and try to keep the positivity going all the time.

I think, compared to [Battle of Britain], there’s a lot more positivity, there’s a lot more — happiness – I feel positive, regardless of the score, that LDD will  come out, and we’ll play strongly, we’ll work together well, but, you know, we’re against big teams.

But, I think that previous experience will help us – we’ve got a lot of players with [general] experience, though. We just keep everything calm, and…

– When the high of the tournament has passed, what’s coming up next for LDD?

Well, other than the tournament, we’re looking for return matches, with New Town and the Fight Hawks, we’re looking at some more new bouts with new teams, which are about our levels.

The problem with [finding bouts in] Scotland, is you’ve got Glasgow, ARRG, Granite, Dundee, even the [Bairn City Rollers’] Central Belters are up there, and Fierce Valley,… and then there’s us. [Our interest is] trying to play with more teams that are our level, so we can get better scrims, and bouting experience.

But, also, we’re really working on our Coed. Fear and Lothian were our big piece of work we did this year, with Capital City, and I think training with men has brought a different dynamic to the team. Definitely, it’s speeded up our game: we’ve got less time to stop and think about things on track.
So, Fear and Lothian will be having a bout, we’ve got a couple of idea of teams, we’re just negotiating that at the minute.

That’s definitely a focus for LDD as well, keeping the Coed going – and really working on our female game, consolidating all the skills we’ve been working on.

So, we’re feeling positive. And I think we’re the kind of team that, you know, it doesn’t matter if we win or lose, but … the thing about Ayrshire was, they’re a great team, they think about this the same way as us: you go out and you do the best you can, and you enjoy it – I mean, that’s why we all do it  – you enjoy yourself, that’s sometimes forgot. And, we are a team that really do; we socialise together, we love each other, we support each other, if we’re injured,  and we do have a lot of kids and they play together too. It sounds a bit mushy, but we’re very much in and out of each others’ lives.

And, it sounds terrible, but if somebody hurts one of my Dolls, I’ll do everything I can to support them.

So, very much, we’ve got a lot of camaraderie between us, and I think we’ve come along way together, through all the ups and downs for LDD; I’m sure there’s more to come.

We are a wee league I mean, ARRG’s got about 60 skaters and you can’t… compare them.But actually,  I’ve skated with some of the girls from the C team, you know, at scrims and things, and they’re a lovely bunch, so…

I think LDD’s getting to know leagues a bit better, I mean, Dundee are very friendly with us, and Granite too… so it’ll be an enjoyable day, we’re really looking forward to it.

The ARRGmageddon Tournament is running on the 26 November, at Auld Reekie’s usual venue of Meadowbank Stadium, as an all-day event starting at 11am.. Ticket prices are £8 online, £10 (£6 concessions) on the door, free entry for under 14’s.

One thought on “An interview with Lothian Derby Dolls’ Captain: Fully Harmed”